My mom used to say “It’ll all come out in the wash.”, if ever I had a problem I couldn’t seem to solve.  Well, this week has been riddled with life’s little adversities…but it has all worked itself out in the end.

One challenge I faced was over this past weekend when we went camping; Baby didn’t take quite so well to sleeping in the van fold-out bed.  It’s been almost a year since we set up camp in Peniki (our old VW Westfalia) and it seems she’s forgotten the drill.  Last year when we were out there on the road, giving in to wanderlust, Baby was much smaller and was easily managed by placing her in her play-pen and giving her some toys and such.

This year…?  It’s a whole different ballgame!  She is our little explorer (she comes by that rather honestly) and she wants to see and be seen, hear and be heard…even in the middle of the night.  Which gets me to the root of the problem: she didn’t sleep…at all!  She screamed, kicked, and thrusted about the camper van like a rabid rag doll.  Needless to say, Mom and Dad did NOT sleep at all either!  Instead, we ducked and guarded ourselves against Baby’s kicks and jabs; I got it a few times, and I have the bruises to prove it!

So…we ‘somehow’ made it through the night–Baby finally went to sleep after I rocked her in my arms, while I was half-asleep…standing up…in the drive-away tent.  Then came the dawn on Father’s Day.  Here we go again…!

Just as the sun was about to make a grand entrance to our lovely, peacefully quiet, and breezy cool morning…Baby began to stir around, then came the screaming!  ‘Why me…?!’  I wondered silently.

Before long, Nico was awake and we were once again being punched and kicked by a half-awake toddler with a really bad temper.  Ugh!!!  I was fast losing my cool, so I enlisted the help of a much more ‘patient’ soul than I myself.  Daddy to the rescue!!!  Yippee!  I didn’t want to land Baby in Nico’s lap on the dawn of Father’s Day, but it was my only choice.

So…that was the start of our Sunday, and I won’t go into details exactly…but I finally had to take over again and enforce a bit of discipline once I ‘knew’ Baby was aware of her behavior, she wasn’t hurting, nor was she still asleep.  A Mom’s gotta do what a Mom’s gotta do sometimes.  And, just as my Mom & Dad would’ve done, I nipped it in the bud.

The crying stopped, I received good morning hugs and lubbings from the very same little girl who’d been kicking me just minutes before, and all was right with our Father’s Day.  We got through the rest of the day without incident, visited with our sailing club friends, worked on our boat a bit, and baby took her very first nap on our new/old sailing yacht ‘Peniki II’ while the rain drizzled lightly outside the stern hatch.

We invited a few club friends onboard Peniki II, had a few margaritas from what was left of the mix that’d been enjoyed the day before, rolled up camp then headed back to the city.  I look forward to doing it again…soon!

*Taking the good with the bad* 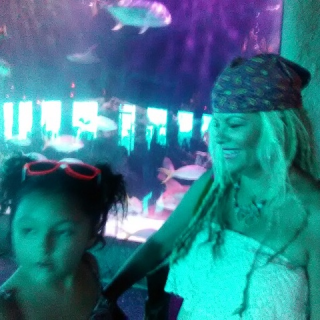 Just a Vagabond who chooses not to fit into societal measures. I strive to live a simple life, below my means....somewhere out there, preferably Off the Grid. My choice of lifestyle and the way my family and I live has often labeled us 'Gypsies', which in-part was the inspiration behind Gypsy Vin Rose -- my artist' name. I write, compose, and perform all original songs about mine and my family's experiences out there on the road...giving in to Wanderlust. Hear my newest works at https://www.gypsyvinrose.com. When I'm not writing new songs, I write books -- women's fiction, children's books...you name it! My last released book was Monday...Super-Fun Day; which teaches the days of the week to young readers. It was my first (and most rewarding) effort at illustrating in watercolors, and my debut children's picture book. I am currently working on my second women's fiction novel, as well as another children's book. Order copies of my written works at Amazon.com, Barnes & Noble, or where ever quality books are sold. Follow links from my author page at http://www.pennyespinoza.com. At this writing, I am between the restoration of my antique sailing vessel, Mystic Mermaid; a 68 Morgan 30, and the ongoing upkeep and restoration of my hip gypsy bus. I invite you to join me as I strive to learn from my failures as well as my successes. After all...the journey is always the best part. May you find your path in life, as I always seek to do. Blessings and .V.. (Peace) Gypsy